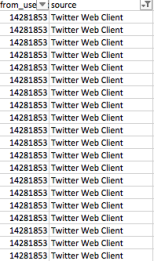 Unfortunately there are still some duplicates in my Twitter data collection, but I can at least share at this point the sources used to tweet from the UK Labour and Conservatives Twitter accounts, as well as some indicative numbers, bearing in mind they may vary slightly, for tweets per source in a sample of 500 Tweets per account from 12/05/2017 to 01/06/2017 so far.

Even bearing in my mind the sample of 500 tweets from each account may still contain some duplicates, the list of sources alone provides objective indication of each account’s social media management tool preferences. Something that stands out is that in comparison to, say, the realdonaldtrump account, none of these tweets were posted from Twitter Ads.

The source list indicates to me that UK Labour has attempted a more professional social media management strategy, with a reduced number of tweets from Android, iPhone and the Web Client, whereas the Conservatives have a majority of tweets coming from free & anyone-can-use apps, with no shortage of tweets coming from an iPhone (but no Android at all).

This short update is part of an ongoing lunchtime pet project for which I wish I had more time, but hey.  I also have data from the other political parties, but no time right now. Anyway, for what it’s worth, I thought I’d share.

N.B. Dear Guardian Data, in case you like what you see here and you ‘borrow’ the idea or any data… please kindly attribute and link back. It’s only polite to do so. Thank you!